Washington Law Review seeks to Spotlight alumni who have made notable contributions to the WLR journal or legal community. If you or someone you know fits this description and deserves to be recognized, please fill this form to nominate them for our Alumni Spotlight. 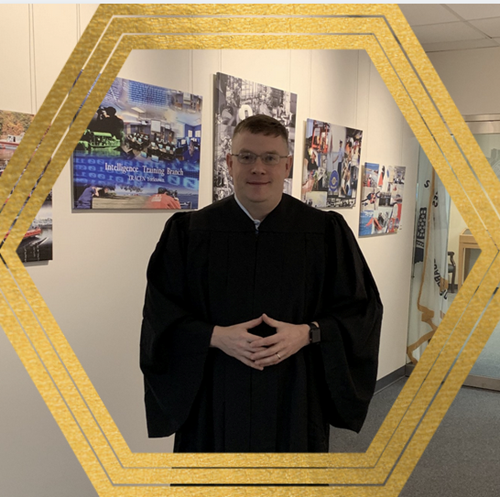 Jeff Barnum is a U.S. Coast Guard attorney, which means that he gets a new posting every two to four years. He currently serves as a Staff Judge Advocate at the Coast Guard’s Training Center in Yorktown, Virginia, and as a part-time military judge. In this role, Jeff has the opportunity to cultivate a very broad practice, dealing with issues ranging from landlord-tenant to citations for drinking in the chapel parking lot to domestic violence cases. In his legal career, Jeff is particularly proud of his role in prosecuting a child sexual abuse case while assigned as a Coast Guard Trial Counsel (military prosecutor), because he was able to help vindicate and give closure to those involved in the situation.

This past year, Jeff contacted WLR to suggest adoption of the Fair Citation Rule. As a self-proclaimed evidence nerd, Jeff regularly reads legal blogs, which led him to the Fair Citation Rule this past summer. Around that time, he had been spending a lot of time considering both personal and collective responsibility around equality and equity, particularly because he often oversees EEO investigations. In the course of his work, he hears a lot of rationalizations, but realized that an individual commitment to equity (even if wholly sincere)  was not the answer—it is the structural barriers that prevent inclusivity. When he came across the Fair Citation Rule, he realized that this was one way to remove a structural barrier.

As a WLR alumnus, Jeff says that his time on the journal improved his attention to detail. He realized this a few years into practice, when he found himself inwardly critiquing an incorrectly italicized period. He also credits the journal with providing him a network of supportive friends and professional colleagues—because you can’t help but be close after spending so many late-night hours cite-checking in Gallagher Library. His advises current WLR members to view law school as a place where you learn how to think and WLR as a place to develop professional relationships with prominent legal folks in the community and faculty.

Washington Law Review seeks to Spotlight alumni who have made notable contributions to the WLR journal or legal community. If you or someone you know fits this description and deserves to be recognized,…
Read More
February 12, 2021 in ALUMNI SPOTLIGHTS

Washington Law Review seeks to Spotlight alumni who have made notable contributions to the WLR journal or legal community. If you or someone you know fits this description and deserves to be recognized,…
Read More
January 1, 2021 in ALUMNI SPOTLIGHTS

During the Winter 2020 academic quarter, the ARC has continued connecting with alumni to build a stronger alumni network. The ARC has also been working with other departments and journals…
Read More
September 15, 2020 in ALUMNI SPOTLIGHTS

WLR's Alumni Relations Committee is excited to announce a new Clerkship Program for current WLR members. The program features a Panel and a Mentoring Program designed to give WLR members who are interested in clerking…
Read More

Get Involved with the ARC

Nominate an Alumnus for the Quarterly Spotlight